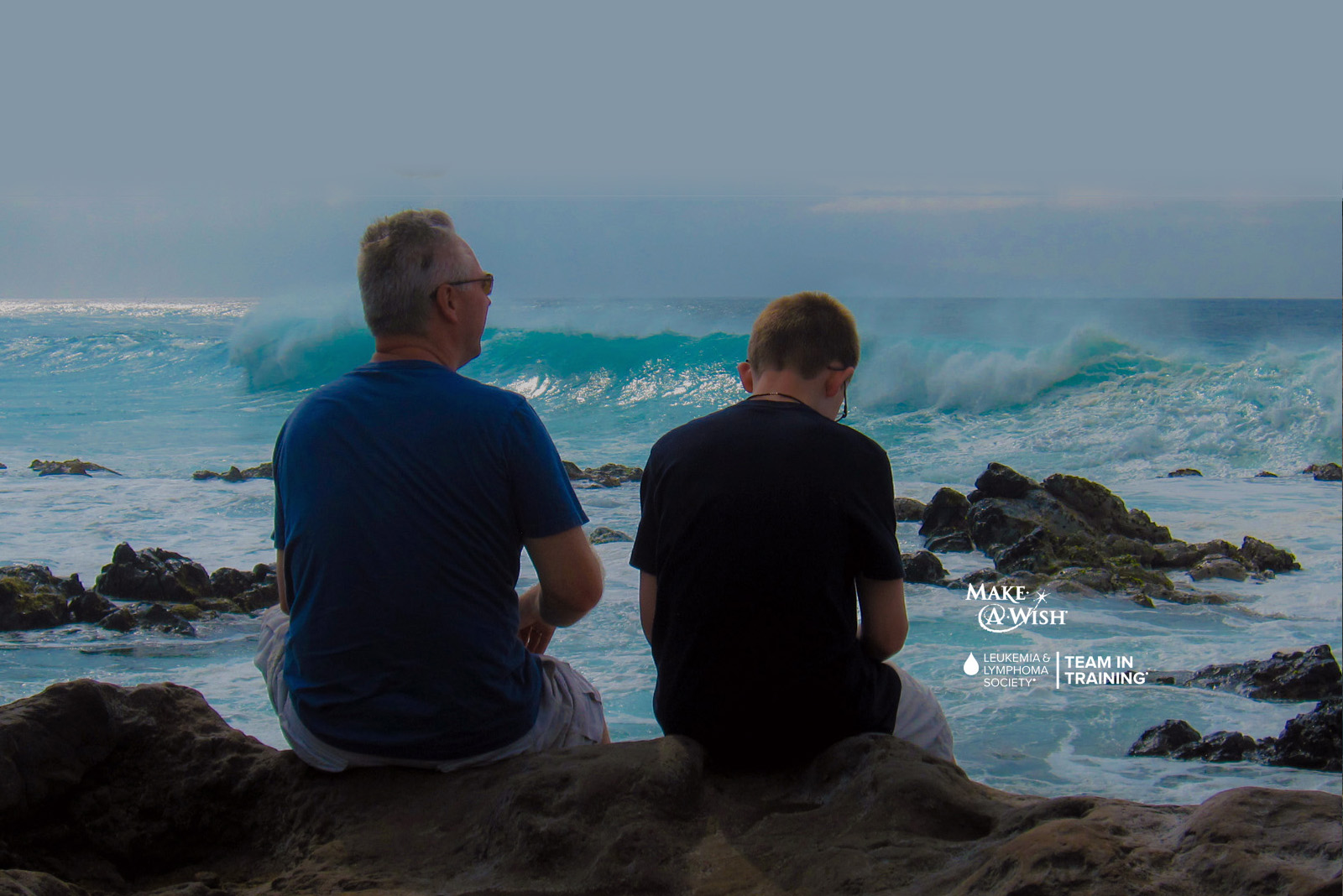 Cameron Ruby: My battle with Leukemia

On January 29th 2015, our world was rocked when our seemingly healthy, 15 year old son Cameron was suddenly diagnosed with AML Leukemia.

After waking up and complaining of pain in his chest and back, my wife Sandy took him to the walk in clinic thinking maybe he had pulled a muscle ski racing the previous day (he was a high school freshman and on the ski team). X-rays and a blood test revealed that he had an enlarged spleen, swollen lymph nodes and an extremely high white blood count level (115,000). This combination led the doctor to believe that Cameron had Leukemia. After letting Sandy know her suspicions, the Dr. called for an ambulance, and both Sandy and Cameron were immediately transported to Beaumont hospital in Royal Oak MI. On their way, Sandy called me to tell me where they were headed and why. It was early in the morning, and I was still in bed. It is a wakeup call that I will never forget! I quickly threw on some clothes, and raced to the hospital, beating them there, crying and screaming in fear the whole way.

Cameron immediately underwent a litany of tests and started Chemo therapy 2 days later after they confirmed he had Acute Myeloid Leukemia (AML). AML is much more prevalent in older adults then children. Cameron had the misfortune of being one of only 500 kids a year to be diagnosed with AML. At the time he started chemo treatment, his blood was 92% blasts, meaning 92% of the blood cells in his body were cancerous. His blood was thick with cancer causing him to have high fevers and his entire body to ache with pain…we felt absolutely terrified and helpless! The only thing we could do was wipe him down with cold washcloths and massage his feet and calves for hours on end, sometimes all night long, so he could try and get a few hours of badly needed sleep. 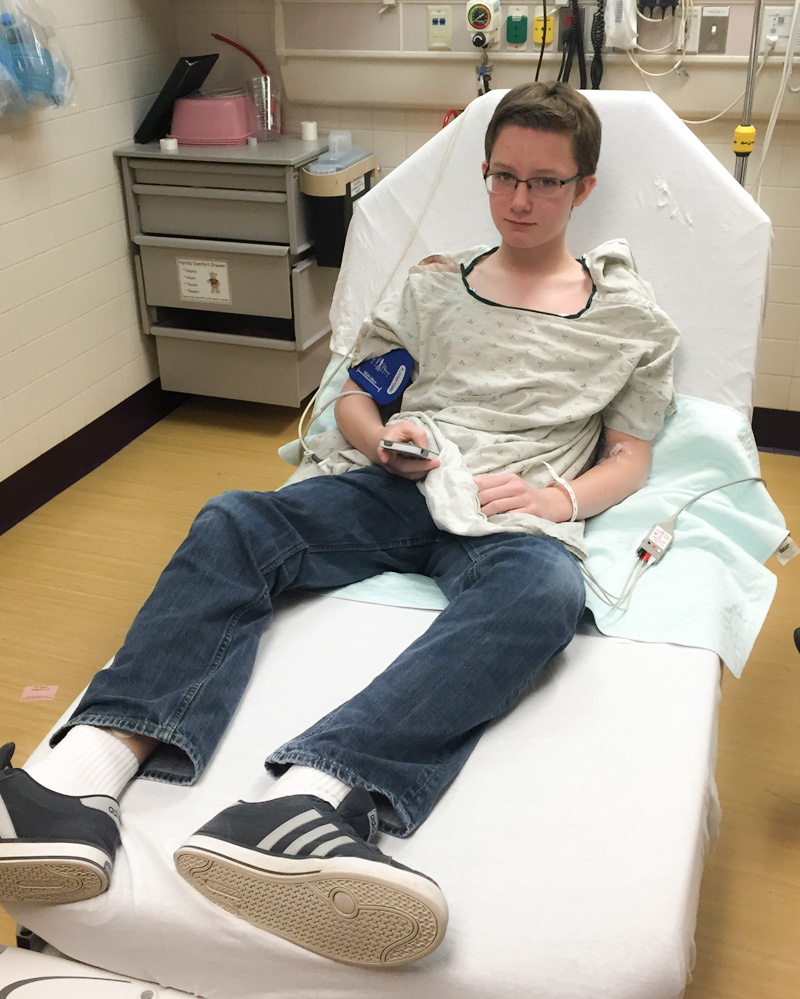 Cameron was INCREDIBLY brave, and underwent 3 rounds of intensive chemo therapy at Beaumont, spending nearly the entire time hospitalized. He took it all in stride and handled the entire process with more courage than we could ever imagine! Throughout this time he continued to amaze us with his compassion for others. One particularly difficult night a baby was brought into the room next door who proceeded to scream all night long. Upon waking up the next morning, he asked if Sandy had heard the screaming baby…to which she replied of course…instead of thinking about himself and how her screaming had impacted his inability to sleep, he simply commented that he felt terrible for that little baby and her parents. He remarked that “she must be hurting more than I am”.

One of the many difficult tasks during the frightening months, were being faced with making decisions about which clinical trials to agree to participate in. These vitally critical decisions rolled the dice with the life of our son. Do you stay with the lousy drug protocol or roll the dice and go with a different cocktail mix of toxic chemo drugs that may be better or could be worse. We had to make these life and death decisions on very little sleep, and certainly without a deep understanding of medicine. You take slightly educated guesses, go with your gut, ask the Dr.’s what they would do if it were their son, and then put your faith in god. I know that is one of the key ways that Doctors learn, and I was ever aware of all of the kids and parents that came before us, making these tough choices and paving the way to new and better treatments.

We had several very scary episodes during his early treatment days, one of the worst being a time when at 3:00 AM when his nurse came to do rounds and check in on Cameron, only to find out that an incision (where his dual lumen Broviac catheter line was installed) had started to bleed very badly. The platelet levels he had were so low that his blood did not have clotting capability and his clothes and sheets were soaked with his blood. He was effectively bleeding out. The lights were flipped on, and I jumped to the commotion of the nurses and Doctors running to help. For several hours that night they frantically worked to get the blood from flowing out of his chest. During that time, I sat with him, held his hand and I did my best to put on a brave face and reassure him that it would all be ok…when just below the surface of my façade, I was screaming in fear and asking god for help…begging for him to spare my sons life and pleading with him to allow me to trade places with him. Cameron tightly squeezed my hand, looked in my eyes and asked me to sing to him. I sang every song I knew that night, in order to keep him focused on me, and to transport him mentally away from the chaos that was going on all around us. Thankfully with the help of some magical surgical expanding foam and very skilled doctors, they were able to stop the bleeding. After he was out of trouble I stepped outside, called Sandy and told her what had happened and then broke down in tears and shook from the adrenaline that was coursing through my body. That was the first of several frightening trips to Intensive care during Cameron’s battle.

Dr. Gowen’s and the other doctors and nurses at Beaumont did a wonderful job, and saw us through the critical chemo treatments. Unfortunately Cameron’s leukemia resisted the chemo, putting him in the high risk category and heading him down the path for the need for a bone marrow transplant. Both his brothers were tested, each having a 25% chance of matching…without this match, we were told that the chance of matching strangers would be 1 in 2 million…but that fortunately there were 12 million people on the registry and numerically 6 potential matches….but that survival rates are best from related donors….we waited anxiously for the results. First we heard, rather quickly after a few days that Aaron was not a match, now all our eggs were in Brandon’s basket. After 4-5 more days, Brandon took the phone call that we had been waiting for and found out that he was a perfect match for his brother. 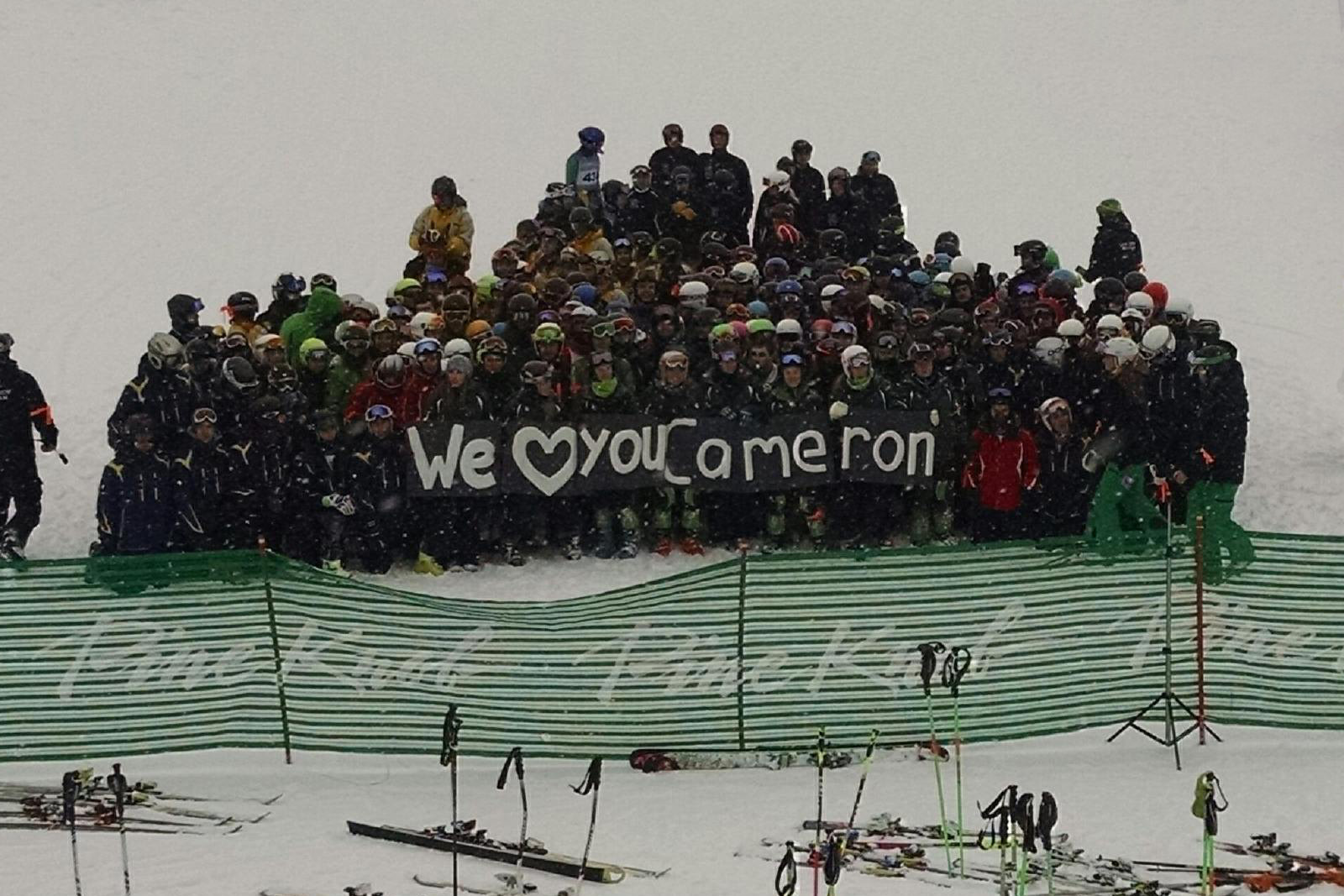 Brandon screamed and hollered with happiness and relief, and immediately called us…we were overcome with joy, as it was the first good news that we had received in months. Brandon elated about being able to help his little brother, and Aaron was disappointed that he could not have done the same. In June we headed to Ann Arbor MI for the bone marrow transplant filled with hope and anxiety. The preparation for the transplant involved wipe out chemo that clears out the bone marrow and prepares it to receive the transplanted cells. On June 3rd, 2015, Brandon’s procedure went very well. The surgery involved two surgeons sticking large needles into Brandon’s hip bones through his buttocks, to extract out the bone marrow cells we needed to give Cameron a second chance at life. The transplant itself was anti-climactic as the bag of cells was hung and transfused into Cameron.

Everything went well immediately after that, with Cameron proving to everyone just how resilient and strong he was. The Doctor was astounded by Cameron and kept telling him that he was the healthiest bone marrow patient on the floor and that he was doing fantastic! We were so filled with hope and positive that the transplant had done its job. Instead of the usual 6-8 week minimum, Cameron’s body responded so well that he was able to leave after a near record time of only 22 days. During our visits to the clinic over the following weeks, and after another bone marrow test we learned that 100% of Cameron’s Myeloid cells where the cancer was living and replicating, were now Brandon’s cells. To us that meant, we were nearly home free.

Then the bottom of our world fell out when some small spots showed up on Cameron’s legs and abdomen. We thought that maybe it was Graft vs. Host disease, but tests from yet another bone marrow test came back with the last thing we wanted to hear…WE WERE CRUSHED to find out the Leukemia was back, in the form of skin lesions, or Leukemia of the skin.

Not only was it back, but it was back with a vengeance, spreading and growing at a record pace and appearing on his spine, and other parts of his body. The Doctors and nurses were devastated to share the news with us that the bone marrow transplant had not worked…they did not know how it happened, but that the wipe out chemo treatment was not able to kill all of the cancer cells…that “there must have been some cancer cells hiding in a closet somewhere”. Not only was it back and the evil spreading, but Cameron’s body so shortly after transplant was in no condition to endure another transplant or aggressive chemo therapy. Basically, we had rolled the dice, taken our best shot with the bone marrow transplant, but now, we were out of options. The options we were given, were to basically fight it with even more chemo (a new cocktail), to somehow make it to the magic 100 day mark after transplant, and then hoping to get selected for a new Phase 1 Clinical trial of some new experimental drug. This option gave us about a 3% chance, but the likely outcome of Cameron ending up in the hospital on a respirator and dying in Intensive Care. The other choice, was to go home take a mild chemo (Hydrea) to slow down the Leukemia, and spend some quality time together before dying in about a month. Talk about two terrible choices! Cameron asked us what we thought and we shared with him that we wanted to fight to the last ounce of our being…but he would not tell us what he wanted. He would only share that he was not ready to make the decision, that he did not want us to make the decision for him and that he was not afraid of dying…only of losing us, or dying in the hospital in pain. Later that night after some reflection, we thought back about Cameron’s words and knew that he had made his decision, but that he was afraid to tell us for fear of disappointing us. We came back together, and sure enough, Cameron expressed his desire and decision to go home. We all hugged and cried as we let the gravity of that decision sink in…we were going to lose our little boy!

On September 2nd, 2015 after spending the month of August at home with his family, friends and his dog Buster, Cameron lost his hard fought battle with Leukemia.

We had 15 fun filled, incredible years together, we laughed, smiled, hugged and loved our way through so many great times that we will always have in our hearts and memories. Sandy and I are slowly learning how to live with the hole in our hearts, and to figure out how to honor and keep Cameron’s name and memory alive. We draw upon the extraordinary example of strength and bravery that Cameron showed us, and to live up to the example he set. Cameron and all kids like him should not have to worry about cancer and fighting for their lives. They should be worried about school, having fun, and what they want to be when they grow up.

Please consider donating to Team in Training or Make-A-Wish to help kids like Cameron, to help avoid the pain they and their loved ones endure and to honor the life of our beautiful son.